Posts: 320
Karma: 10
Less More
Thank you received: 72
Beard's Halloween Stop Motion Project #1166
Looking good. Wow that's a large set to add clay onto, but I bet it turns out nice. Have you considered making a texture pad to texture it? It might make adding the texture go a lot faster.

Posts: 2
Less More
Thank you received: 0
Topic Author
Beard's Halloween Stop Motion Project #1165
I said I was going to make this after last stream, but considering the deadline for starting to shoot is closer than I thought I had to really buckle down and focus before I could take a break. Here it is now though.

A friend of mine and I are going to try and making a super short animation before Halloween so here is where I'll post progress and the steps I took to get to the end product.

First I build myself my first wood stages, for some reasons we won't be able to do the shooting at my place so they are designed to be portable enough to fit in my friend's smaller car but also designed with some of the features I remember seeing from Stop Motion Magazine's youtube channel where you can clamp one to the other for an easy back wall for animations that happen in a small room.

Then I took random materials I had to get an idea of how things would lay out, how shadows could get cast with different lighting setups, etc. The towel rolls are my placeholder trees as the animation happens in a forest setting, the calibration cow is a stand-in for a character to get an idea of scale. Next step I had was to gather more materials, I didn't have to time to cast my own eyes even though I do have some resin so I bought some beads at the store, they didn't have white, rather they had pearl style beads, I got those instead, but with a little scratching with my nail I was able to peal off the thin pearl paint and it looks like it will do well color and size wise for this animation. From there I got to work building up the set, since I'm still kind of new to a stop motion project with this set size I didn't have a lot in terms of materials, but I did have though was tons of amazon delivery boxes from the equipment I did order so I cut that into rectangles to use as my build up material for the terrain, I went with a topographical style of layered layout and marked where I wanted to cut and made my cuts, I wanted to then cover the layers with cling wrap like I did the main stage but I really had to move things along since I still have a puppet to create as well as foliage. I then spread out my clay on top of the layers of cardboard and all over the stage, this what quite a task as I didn't have a spare pot to melt my clay as was suggested in the Animate Clay's podcast's stream suggest, thing it was Ron you suggested it. So I used my clay sculpting tools to lay it out and while I still have some clean up to do it looks decent. One problem I faced was that I marked the cuts for my cardboard with a thick marker and the ink leftover from those marks bled into my clay a little, but once I start adding trees and other stuff as well as go and clean up the terrain it should work out. As for the studio area I'm setting up, I'm using a ping pong table with one side folded up, this is pretty useful as it's really sturdy and it gives me a backing I could hang matte's or a green screen from as well as where I have a small clip on led lamp that helps a lot when set building late at night. Another nice thing about the ping pong table is that the table halves are actually quite deep, I plan to build 2 more sets of stages that are 1ft in depth but with different leg heights so that I can have multiple layers of background environments for future projects and they will fit nicely on this size of stage. 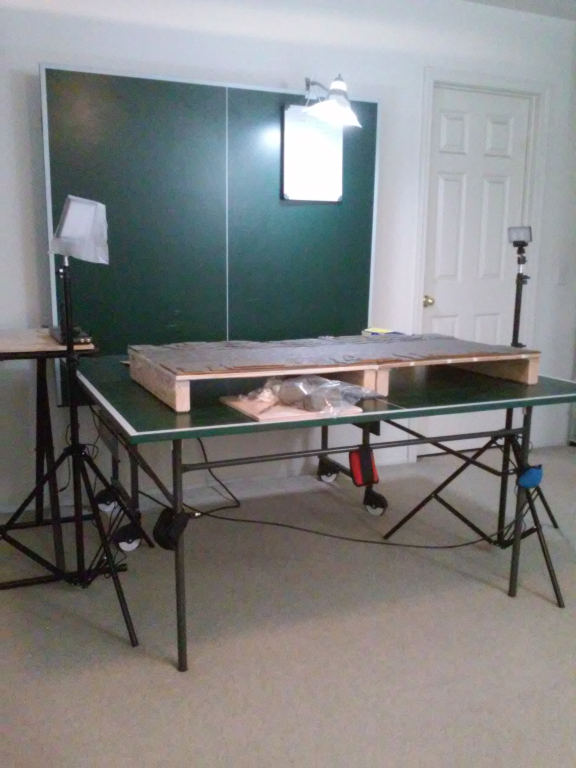 So that's all I have the energy to document for now, but I'll try to update this at the end of each day that I get tasks finished!